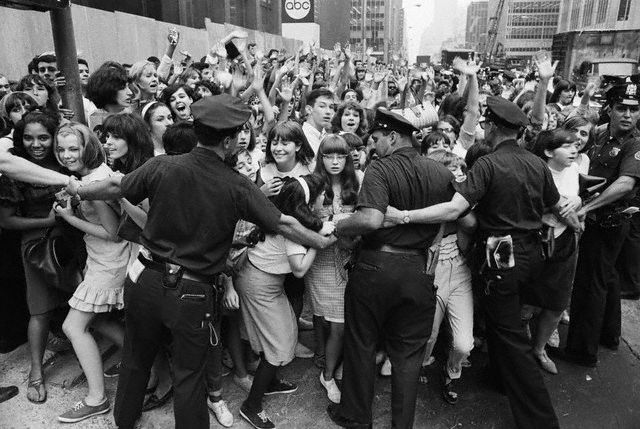 (Photo: Magic Fans Out of Control Once Again)

My younger daughter asked me to do a magic show for her 12th birthday party – that’s pretty normal – she’s asked for a magic show most years that I remember.

A couple days before the show I was having chili burgers with a friend who’s a professional magician and he warned me that 12 is a tough age – it’s about the time that kids start to think they’re too old for magic shows. This reminded me of the shows I had done for my older daughter at about that age – one year her friends were falling over themselves with enthusiasm and the next they were so reserved. I figured it was me. Well, it was, but it wasn’t just me.

Imagine what’s going on in a tween’s mind when they sit down for a magic show. I know from my own daughters that tween tastes change incredibly rapidly. For example, every time our family takes a road trip I make CDs of songs to listen to on the way and my kids always clamor to get a few of their current faves on the CD. Every once in a while I haul out a trip CD from a year or two earlier – all the songs I chose sound pretty good, but when one of the kids’ choices plays my girls start screaming “Take that off! I hate that song!” Fortunately, this seems to be a temporary phase (my 15 year old is pretty much through it), but it’s very real in tweens – I think it’s the age when they’re trying to figure out what their tastes are.

When a tween sits down for a magic show, chances are they haven’t seen one in at least a year and that’s a long time for them – they have no idea if they still like magic shows, so it’s natural they’d have a little trepidation: “I liked magic when I was a kid but I’m not a kid anymore. I might hate this.”

Add to this the fact that they are at an age where they are supposed to be figuring things out – every day at school they learn how things work – things they thought were magical only a few years earlier. Wouldn’t it be the most natural thing in the world for them to think, “Hey, this magic stuff fooled me when I was little, but now I should be able to figure it out, shouldn’t I?

And on top of all that, at this age peer pressure is insane: no one there wants to be the first to laugh – I mean, what if you laugh and your friends don’t?! And you really, really don’t want to be the first to go “WOW!” because “WOW” is an admission to all your friends that you have no idea how it was done. You might as well just stand up and announce, “Hey! I’m stupid and I like little kid’s entertainment!” Not going to happen.

Now none of this occurred to me before I did the show (I wish I was that smart). Honestly, about the most coherent thought I had before the show was, “I think it’d be fun to mess with their heads.” That and “Oh, there’s that card silk I bought three years ago still in the original packaging – I wonder if I could do something with that…”

So this is what I came up with, and I’ll tell you, it worked incredibly well – by the end of the effect, I don’t think those kids could have been more engaged and enthralled. While I think it would play well for a lot of audiences, it is particularly well-suited to drawing a 12-year-old mind into accepting the wonder of a magic show. Here it is:

I stood up in front of them – naturally, there was no spotlight, no silence, the kids were still arguing about who would sit next to whom and they barely noticed me up there. I asked them to sit because the magic show was about to begin and then as they were still chattering, I struck a very magician-like pose: “Ladies and Gentlemen! I will now perform for you a classic of magic: pulling a silk from thin air! Notice please that I have absolutely nothing in my hands…”

I did a very great show of displaying my empty hands – I wiggled my fingers and formed a fist. I looked with great intensity at my fist.

Then I looked at the crowd – if I had wondered before how I was going to find my motivation for what was about to happen (because I really wanted this moment to be natural), I didn’t have to wonder any more: one look at those faces was all I needed…

They weren’t into it. Oh sure, I had their attention, but they just didn’t care. Sure, some were trying to figure out how I was going to do it, but no one was caught up in the mystery or the magic. No one gave a shit.

So I stopped. “You guys don’t really want to see this, do you?”

And you could see the flash across their faces: they didn’t see that coming.

“I mean, it’s a cool trick – pulling a silk out of thin air! But really… it’s a silk! Why is a grown man pulling silks out of the air? Don’t get me wrong – I’ll do it for you if you want.”

I struck the pose again. Then I dropped the pose again. “But really, what am I going to do with a silk? Blow my nose? You don’t want to see this trick. How about a card trick?”

At this point, they were baffled but they were starting to engage and willing to give me a little more time. I pulled out a deck of cards, gave it a quick shuffle and had a card selected – I showed it to everyone in the crowd, returned it to the deck and had someone shuffle.

I strike that pose again and show my hands empty. At this point, the kids faces have lit up, they’re calling out answers – everyone is participating.

“What do you think? Find the card? Or the silk from thin air? Or maybe… you’d like to see the mystery of The Chinese beads…”

And this is when I bring out a beautiful, colorful, very mysterious looking Chinese box (that I bought for $2 at Target). Much to my delight, these ADD-addled kids shout out that they want to see the Chinese beads.

I approach them with the little box on a tray – I open the box and pour out… nine crappy little plastic beads in different colors (that I just grabbed out of my kids’ beading box).

“Hey, those are just regular beads.”

“But they were made in China!”

“Everything’s made in China!”

“I know but still – we’re going to play a little game with these, a game called, pick two and eliminate one…”

I move from left to right, giving each kid a chance to make a choice. We eventually narrow it down to one bead, the green one.

“There! Everyone had their say and together we arrived at a choice – the green bead. Green. Now what could we possibly do with that information?”

I struck a pose that was familiar to them now. “Ladies, a classic of magic: the silk from thin air!” And I reached into my fist and pulled out the smallest tuft of the corner of a silk – and it was green!

“A silk! And it’s green! Not only that… there’s something printed on it…”

I pulled the silk out slowly at first then unfurled it – there was their card printed on the silk!

And they went crazy!

From that moment on, I could do no wrong. This opener established my authority, but at the same time kept things real and playful. It announced that they wouldn’t always know where things were headed, but assured them that I did know – they were in good hands so they could just let go and enjoy the ride. And I think on some level I had acknowledged their doubts about what they were going to see: “You know what? There is something silly about magic. So today we’re going to do something a little different. I won’t talk down to you and you even get a say in how this is will all go down. So let’s have some fun!”

It was a short show but when I went back and asked the kids individually what trick they liked best, the answer was always “The silk from thin air.”

Method: obviously, nothing new here method-wise but these are all good, solid methods that have fooled millions and will fool millions more: a card silk with a green (or whatever) border, a card force (I used a Hofzinser), the PATEO force (I’d explain it, but Google does it so much better) and a thumb tip concealed very cleverly (okay, it was in my pocket). The nice thing about showing your hands empty a number of times is that by the time you’re actually ready to do it, the heat is pretty much off.

Go Back to Film and Magic Blog