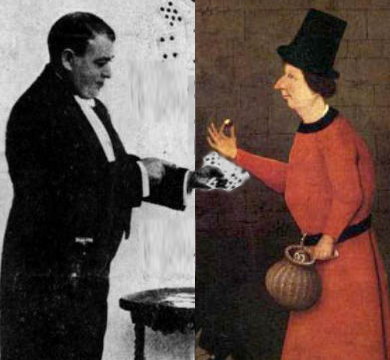 I have a question: is there such a thing as a tradition of magic we might call "serious" or "high art" and if so, what is it?

In most arts there is a traditional distinction between high art and popular art. Some examples: ballet vs. tap, symphonies vs. folk songs, literature vs. pulp fiction and comic books. While it was never an ironclad separation (for example, Shakespeare is both) the distinction is less popular now than ever. It reeks of elitism: the distinction was often used by the rich and educated classes to prove their superiority to the masses. Not that these works often weren't better, it's just that to the elite their superiority was self-evident -- even if they didn't know the first thing about music, they felt better about themselves by going to the opera.

Cinema, being born as the old class system was falling apart, never really bought the notion that that "high art" equaled "good art". Most cineastes revere Hollywood directors like Hitchcock and Scorsese right along side the giants of art film like Bergman and Kiarostami. But today, in cinema, the two traditions seem more muddled than ever. A director like Christopher Nolan can go back and forth between "arty" material like backwards narrative (Memento), dark psychological portraits (Insomnia) or dreams within dreams within dreams (Inception) to comic books (Batman) and no one thinks it's unusual.

Now to magic: it seems to me that while there's certainly a lot of artistry in magic, there's no real tradition of "high art" or anything we could call "art magic". Put another way, if Dai Vernon was magic's John Ford, who is magic's Ingmar Bergman? Who is the slow, serious artist who makes the audience meet him half way?

The other defining characteristic of so-called "serious" art is close attention to so-called "serious" things such as formal design and originality, emotional power and nuance, psychology and meaning. Again, you find all these things here and there in magic -- attention to formal elegance, striving to be original, working to get strong audience reactions and the psychological nuance of both the magician as character and spectator who's asked to choose a color. Even symbolism sometimes rears its arty head in magic: Eugene Burger's "Gypsy String" metaphor between the destruction/creation of the universe and a the destruction/creation of a thread has the same kind of yoking together of the cosmic and the trivial you often find in lyric poets: "To see a World in a Grain of Sand, And a Heaven in a Wild Flower..." (William Blake, Auguries of Innocence)

So yes, there is much that is artistic about magic -- it just seems to me it never really clumped together into any kind of tradition we could call "art magic".

Or am I missing something? Your thoughts? chris@magicaonline.com

Go Back to Film and Magic Blog